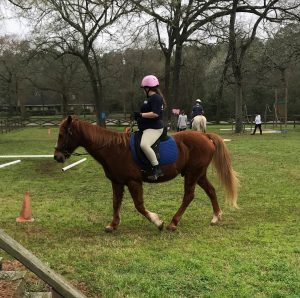 Shelby Day used to be afraid of almost everything — including animals.

During her first visit to SIRE Therapeutic Horsemanship when she was in the third grade, Shelby was hugging one of the horses within no time.

That was 20 years ago. Since then Shelby has won dozens of riding honors for her horsemanship, achieved competitive success in at least six additional sports and served as a Global Messenger spokeswoman for Special Olympics.  She has developed such confidence that people say they can’t imagine her ever having been afraid of anything.

“It has been amazing,” Shelby said of her years training at SIRE.

Her mom, Kari Day, concurred. “Shelby loves going out to SIRE. Shelby would live out there if she could. It’s her happy place.”

Shelby has a rare chromosome disorder, and doctors have been unable to find another person with the same condition. Throughout her life, Shelby’s family and her medical team haven’t known what challenges to expect with her condition, Kari explained. Shelby is unable to do math or drive, and sometimes she needs help with basic tasks like brushing her hair. But she can look at family members’ appointment calendars and later recite their activities for the month by date, time, person and place. 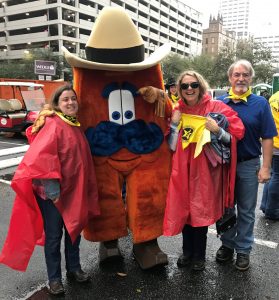 For two decades, SIRE’s trained instructors and volunteers have been a part of the team to help decipher the puzzle, and through her horse therapy work, Shelby has grown stronger cognitively, socially and emotionally.

“SIRE has made such a difference,” Kari said. “Before, Shelby wasn’t able to ride a bike. Riding at SIRE has helped with her core muscles, so now she can. We can see how the work helps

with fine motor skills and builds her confidence. When you get all those things working together, it helps with her cognitive learning, too.”

In addition to weekly sessions at SIRE, she loves the competitive experience of the Houston Livestock Show & Rodeo’s Top Hands and Special Olympics horse shows. At this year’s Top Hands event, she brought home first place in English Equitation, sixth place in Showmanship at the Halter and fifth place in Trail. As a participant in Special Olympics over the years, her en

ergy and athletic prowess has primed her to not only compete in horsemanship events but also in basketball, track and field, softball, golf, swimming and bowling.

Shelby made such an impression with Special Olympics organizers that they invited her to serve as a Global Messenger spokesperson for the much-loved sporting event. She spent a day in immersive training to learn more about the Special Olympics program and what to expect at speaking engagements. Soon after, she was the only athlete to speak last fall at the VIP reception for a fundraiser with Tim Shriver, the organization’s national chairman and son of the late Eunice Kennedy Shriver, who founded Special Olympics.

Shelby reminded her mom to explain how proud she was that Tim Shriver took notes during her remarks and quoted some of them in his own speech. He recounted that Shelby talked about how being nominated for Global Messenger came at a good time for her because she had been feeling “like she wasn’t good enough.”

But time and again Shelby has shown herself to be a brilliant star. Last year, she was also named Special Olympics Athlete of the Year for Area 6 at the Area 6 Special Olympics Equestrian Competition.

When she’s not competing or training at SIRE  or enjoying other sporting interests, Shelby maintains a robust volunteer commitment. She helps with the Early Childhood Intervention program for children with special needs at Katy Independent School District. Through her church ministry, she feeds breakfast and lunch to Alzheimer patients while their families spend a few hours away attending to other errands, and she volunteers with an after-school music program for preschool and elementary-aged children.

“Shelby was always afraid of so many things,” Kari said. “Now she has no fear. We can attribute that to her work at SIRE.” 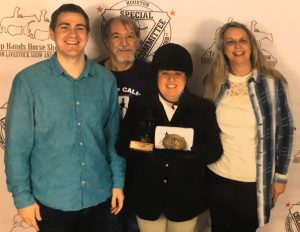