Advocating for SIRE from the Arena to the Fair

During a decade of volunteering at SIRE, Stephanie Tamborello has relished the joy of witnessing a boy’s first-word spoken: “Mom.” She shared the weekly improvement of an Air Force veteran building core strength to sit up straight on the horse after being unable to hold himself upright or walk after a car accident years earlier. She’s kept in touch with her very first rider, a fifth grader with significant hearing challenges, who has since entered her second year in college, pursuing a degree in American Sign Language.

“Being able to work with the different riders has been the biggest reward for me,” said Stephanie, whose many donated hours have included working with the riders and horses at Fort Bend and in various competitions, fundraising, serving on committees and representing SIRE in the community.

“Every instructor and site manager I’ve worked with brought a different perspective,” Stephanie said. “I learned how to work with the horse to work with clients, about the spiritual connection between horses and riders and about horsemanship and how to lead and tack. It’s really a good group that has been gifted in the different ways they brought to the work.”

An advocate for retelling her positive experiences to involve others in the therapeutic horsemanship organization, Stephanie recently underwrote the purchase of a SIRE booth at the Fort Bend County Fair. She worked the booth herself and coordinated other volunteers to join her during the 10-day event, which hosts 200,000 people annually. In the photo, Stephanie is at right with fellow volunteers, from left, Becky Knesek and Madeleine La France.

“The type of work people put into this organization is extraordinary,” she said.

Thanks to Stephanie and other volunteers, the effort amassed an expansive roster of names and contact information for people wanting to learn more and become involved. By the time Stephanie showed up for her next volunteer slot at Fort Bend, one prospective volunteer was already on site to explore, and calls from interested fair goers had already rolled in asking when they could begin. 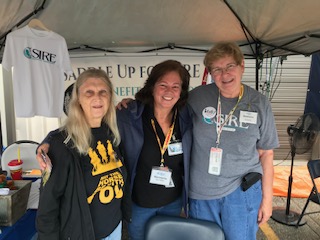 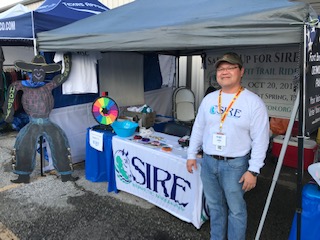 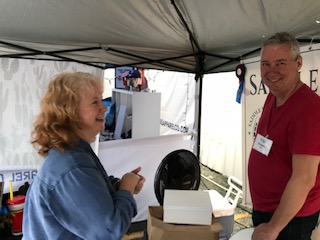