Halfway across the country, one of SIRE volunteer Randy Cochran’s six grandchildren lives with autism spectrum disorder. Seven-year-old Markus Randall, his namesake, resides in Virginia with Randy’s daughter and her active-duty military husband. Markus participates in various special programs to help him triumph and live his best life. Randy often thinks about this while helping others at SIRE.

“There are a lot of people involved in the programs that help my grandson,” explained Randy, who travels to visit four times a year and, like every grandparent, laments that he and his wife, can’t see him more. “Volunteering at SIRE is a way for me to pay it forward. After helping with one class at SIRE, you’re hooked. It helps me not miss being with Markus so much, knowing I’m helping other people with similar challenges to his. I’ve learned an awful lot about children with special needs.”

Randy regularly volunteers three days during the week and Saturdays. A heavy equipment salesman, Randy arrives at his office by 6 a.m., leaves by 4 p.m. and spends the early evenings working with riders and families at the Spring facility before he lands back at home around 8 p.m. 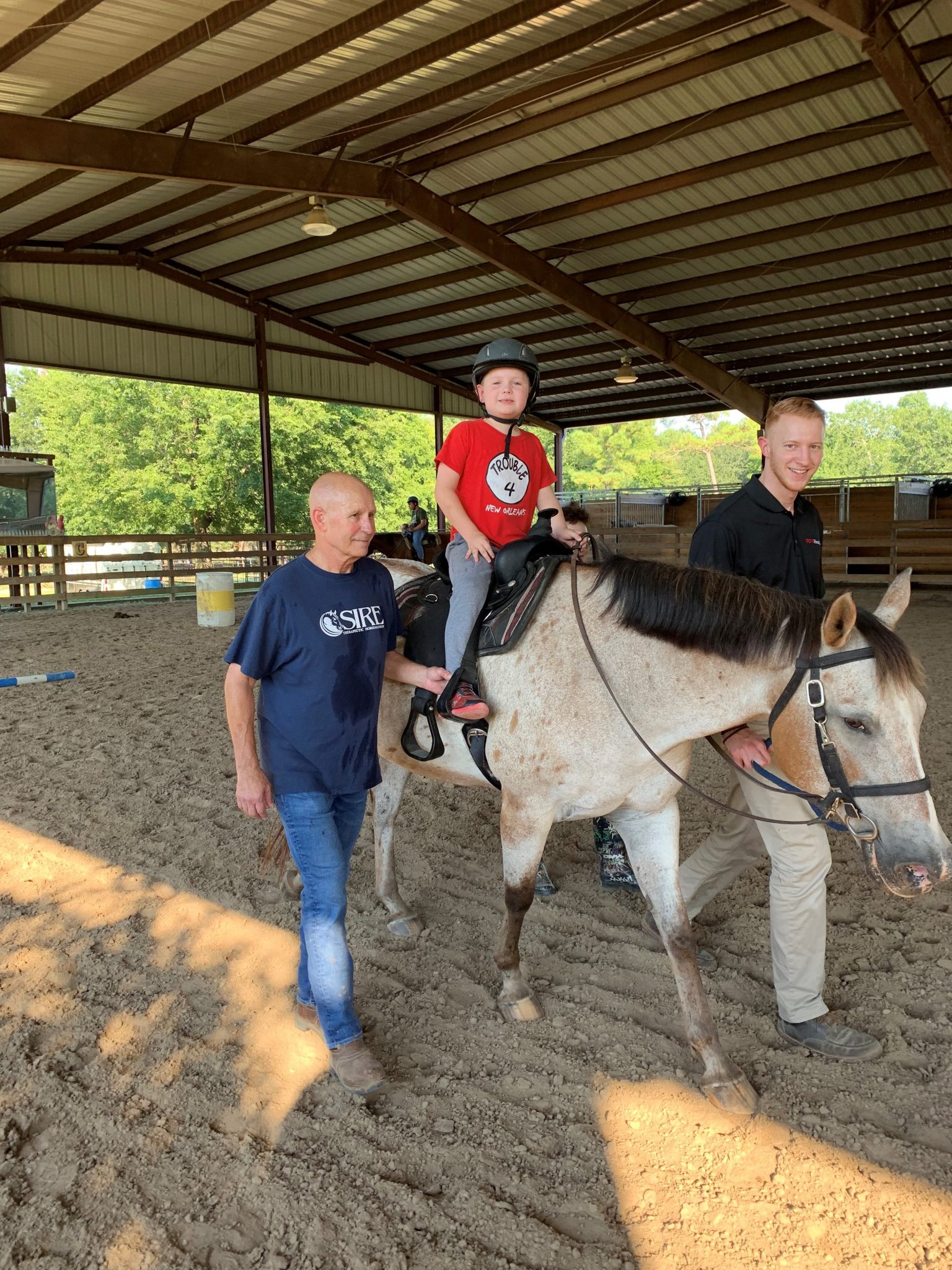 He said he often hears from the parents about the differences SIRE makes in their children’s lives and how much all the parents love the program. He fondly remembers a Christmas card he received from one parent who thanked him for helping to bring their daughter “out of her shell.”

The experience enables him to connect with other families and to learn about the communication cues used by people with special needs who may not be able to talk.

“One 13-year-old girl who comes to SIRE sits, looking sullen and by herself before she rides,” he described. “But she gets on the horse, and it’s amazing how conversational she becomes. Some of the riders don’t talk at all, but you can see in their eyes that they know who you are and that they know you are helping them.”

Volunteering at SIRE has become an extension of the part the family that he doesn’t get to see as much as he’d like.

“Being here, you actually become part of a pretty big family,” said Randy, who has been volunteering with the organization for about three and a half years. “It’s amazing to see the contributions made by the staff, both mentally and physically. And there’s the enjoyment of being part of the kids’ lives, their families, their growth and being a part of their week.

“Over the years, I’ve coached kids’ basketball, football and baseball at the schools and church, and this is the coolest thing I’ve ever done. To know there’s something out there you can contribute to is so amazing. I can have the worst day in the world at work, and by the time I enter the gates at SIRE, I realize I don’t have any problems at all.”